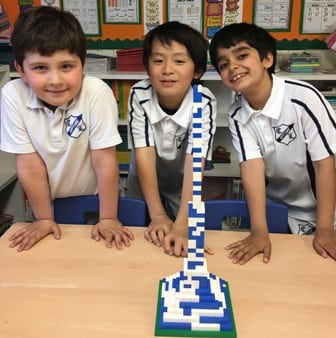 We introduced an after-school Lego Club this term and it has been a great success. Pupils have already enjoyed making their portraits out of Lego, representing their country of origin’s flag and making their names in Lego. Just before half-term, in Lego club, pupils were learning about the stability of tall structures and how to engineer tall buildings that are also strong.

Because of overpopulation in LEGOville, pupils were told that the city had no more land to build on. Therefore, the LEGO people had to build up instead of out.

The challenge was to help LEGOville solve their problem by constructing the tallest LEGO skyscraper. The pupils had to keep in mind that there are lots of earthquakes in LEGOville, so the tower had to withstand an earthquake (shake test).